As always, there's lots going on in the woods and meadows of Big Creek Homestead. Here are a few photos of the flora & fauna that have caught my attention and some homestead activities of note.  After photographing pinesap for my early July blog post, I kept an eye out for a more widely known chlorophyll-less plant commonly known as ghost pipes or Indian pipes (Monotropa uniflora). These plants are able to grow in the darkest parts of the woods as they do not need to photosynthesize. Rather, they can't photosynthesize as they are myco-heterotrophic, meaning they obtain their energy compounds from fungi (Lactarius and Russula species), which in turn get their energy from tree roots. 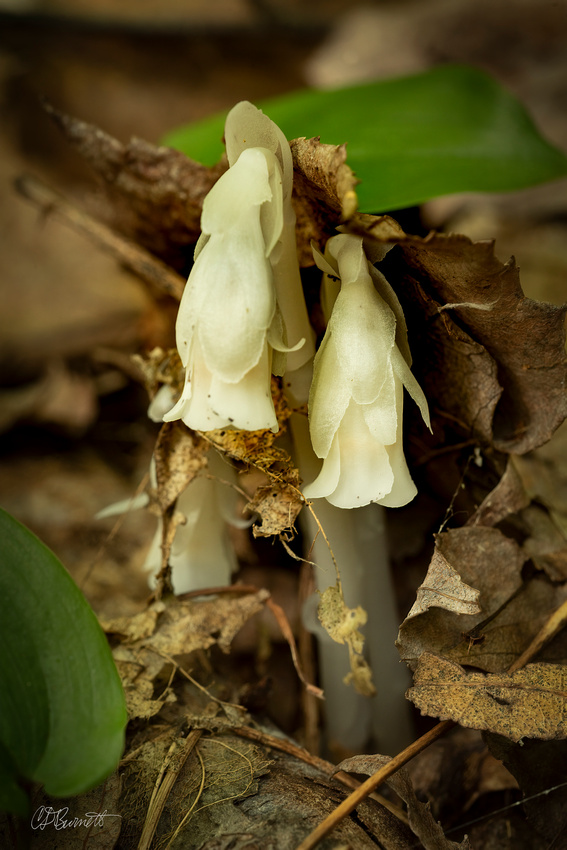 Ghost Pipes with Leaf LitterMonotropa uniflora is reported to be edible & medicinal, but it contains several glycosides and is possibly toxic.

Speaking of fungi, I’ve discovered a healthy population of dead man’s fingers (sounds like an oxymoron) digesting a pile of rotting slab wood near the homestead’s sawmill.  There are many of species of dead man’s fingers (Xylaria spp.), and specialized knowledge and equipment (that I do not possess) are needed to be sure of specific identification. 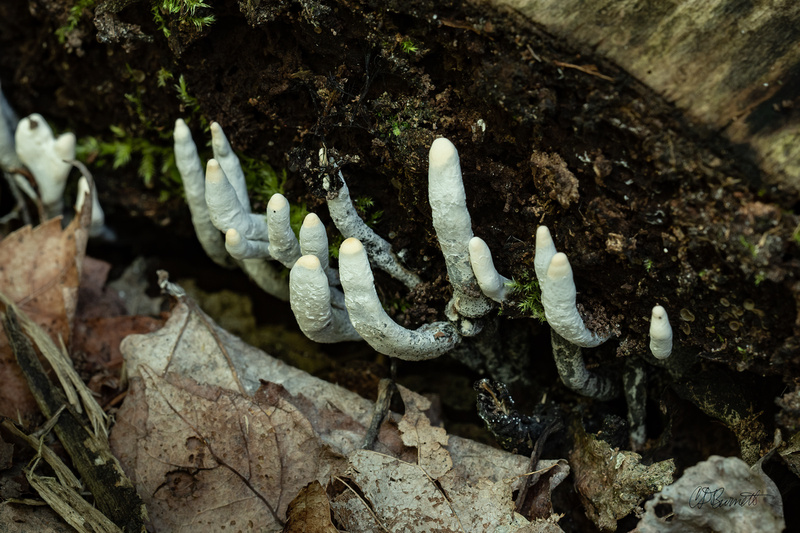 Speaking of rotting wood, many interesting creatures can be found by rooting around in and under decomposing wood debris. Salamanders are my favorites, but they are seldom found here due to our dry, sandy soils. Luckily, I recently found a cooperative red eft (Notophthalmus viridescens) while collecting firewood. Red efts are known to travel great distances (for salamanders) to reach aquatic habitats that are required for the adult phase of their lives as Eastern red-spotted newts. This one was about a third of a mile from the nearest open water. 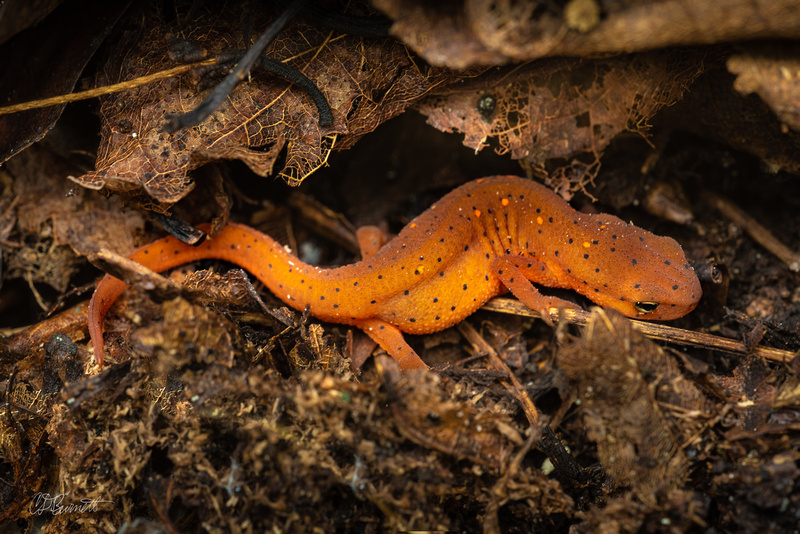 Collecting firewood is an ongoing part of life at Big Creek Homestead whenever conditions and time allow. Efficient combustion requires low-moisture wood, so cutting wood a year or two before it’s burned is needed to allow time for drying. Efficient wood processing is also critical if heating with wood is to be more than a recreational activity. Without a good system, the number of times a piece of wood gets handled can get ridiculous. My latest innovation in this regard is to roll logs from the trailer directly onto a sawbuck. This saves using the tractor to unload the logs and puts them at a good height for bucking. The wood then gets stacked right next to where it’s bucked, ready for splitting. Also note the light-weight, battery-powered chainsaw, a great energy saver for the sawyer and the planet (especially if charged with solar power, as mine is). 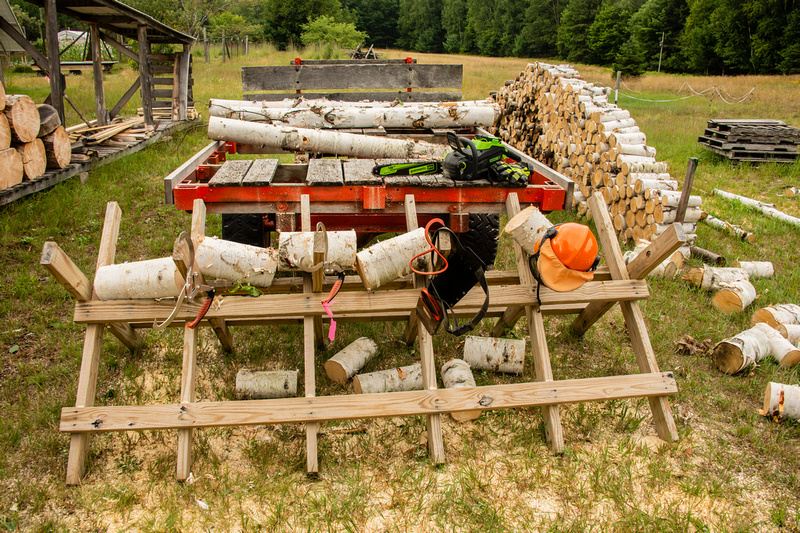 Trailer to SawbuckUnloading firewwod logs by hand directly to a sawbuck saves tractor fuel & energy for the sawyer.

Whereas most woodland flowers bloom early in the growing season when they can get enough light before the canopy closes, openland flowers generally bloom in the longer daylight hours of  summer. As herbal medicines have become more popular, many people have learned that St. John'swort (Hypericum perforatum) has legitimate medicinal uses, but I suspect few know that it is a common weed in many areas, including the Upper Peninsula. If you’re tempted to experiment with it, please know that it contains many biologically active compounds, including some dangerous ones, so do the necessary research. 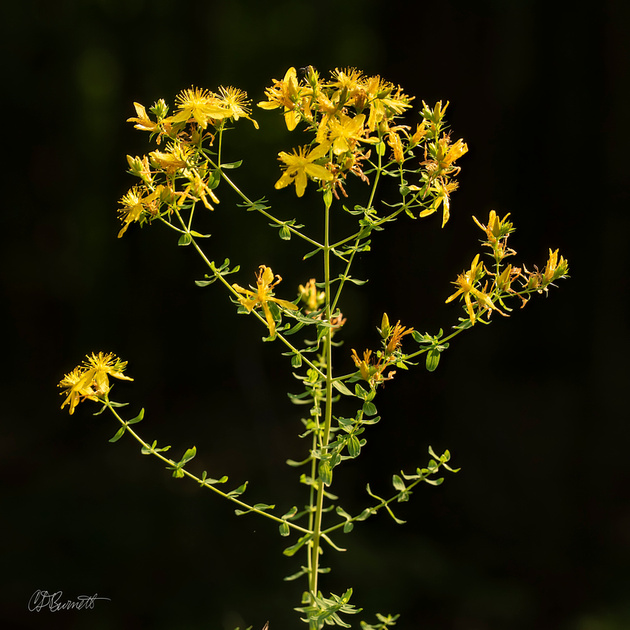 Perforate St. John's WortSt. John's wort has a long history of herbal use. It fell out of favour in the nineteenth century but recent research has brought it back to prominence. The plant contains many biologically active compounds, so caution is recommended.

Another plant with healing properties that’s getting  more attention from the medical community is groundcherry (Physalis spp.).  Physalis is a member of the nightshade or tomato family (Solanaceae) which contains many toxic, as well as edible and medicinal, compounds. At Big Creek Homestead, clammy groundcherry (Physalis heterophylla) is a common weed of disturbed soil (e.g., compost piles, flower beds).  Its ripe fruits, which are like tiny tomatoes inside a Japanese lantern, have a weirdly ambivalent flavor, alternating between tomato and strawberry. 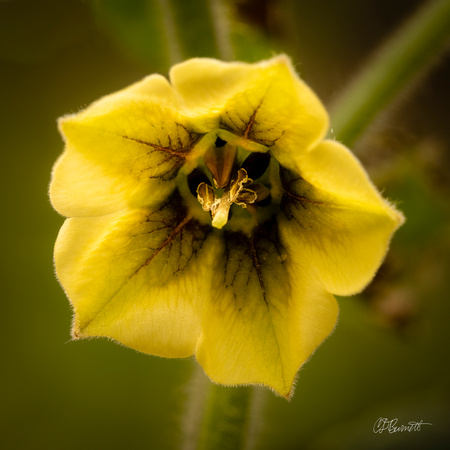 Under Clammy GroundcherryLooking up from under Physalis heterophylla 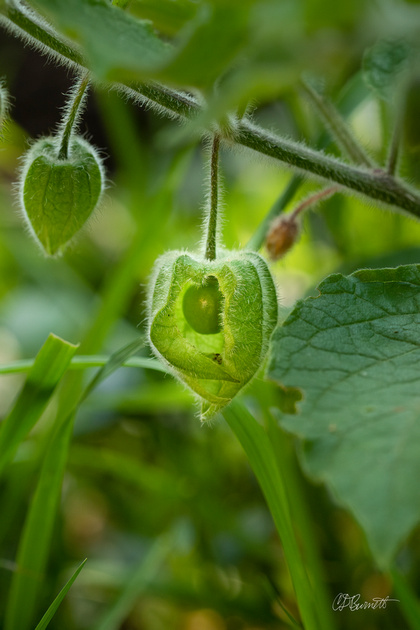 Clammy Groundcherry FruitA native perennial, clammy ground-cherry fruits are edible when ripe, but the rest of the plant is toxic. Anthropogenic (man-made or disturbed habitats), meadows and fields.

Part of our land management program at Big Creek is the introduction of prairie plants native to the Upper Peninsula as an adaptive strategy for the warming climate. Yellow coneflower (Ratibida pinnata) is one of the showy species that is starting to “take-off” here. The flowering “cone” is covered in hundreds of tiny brown disk flowers that bloom from the bottom of the cone upward. 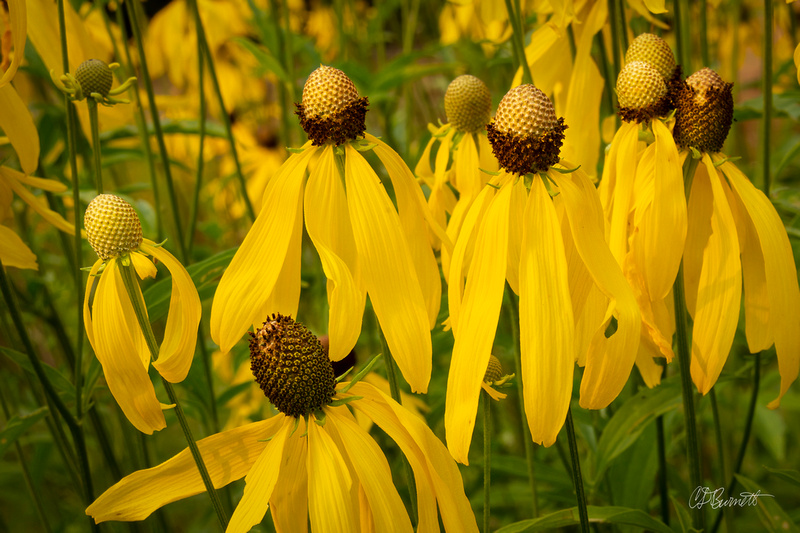 Although we dabble in prairie plants and domestic ornamentals, most of our plant propagation efforts go into the vegetables, mushrooms, and apples. Over the years, we’ve learned to concentrate on species and varieties that do well in our sandy soil, such as carrots. I our experience, the key to success with carrots is using pelleted seeds, so spacing can be readily controlled, and keeping the soil moist until the seedling are well established. 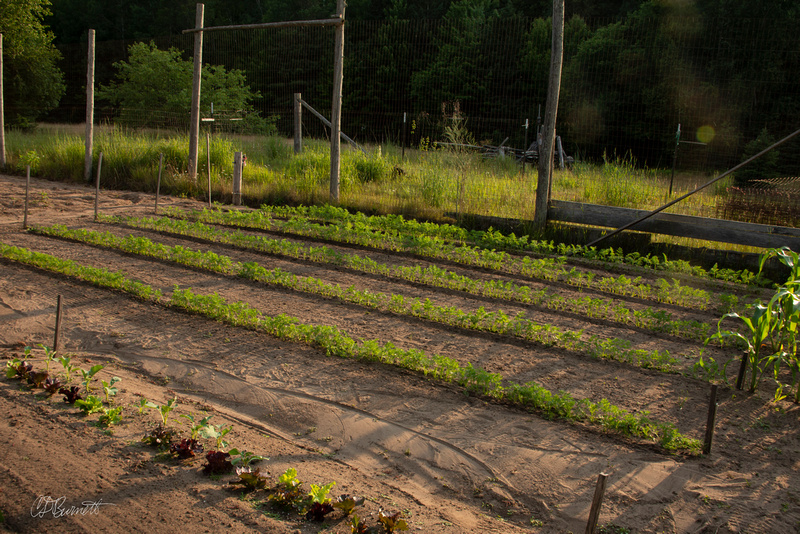 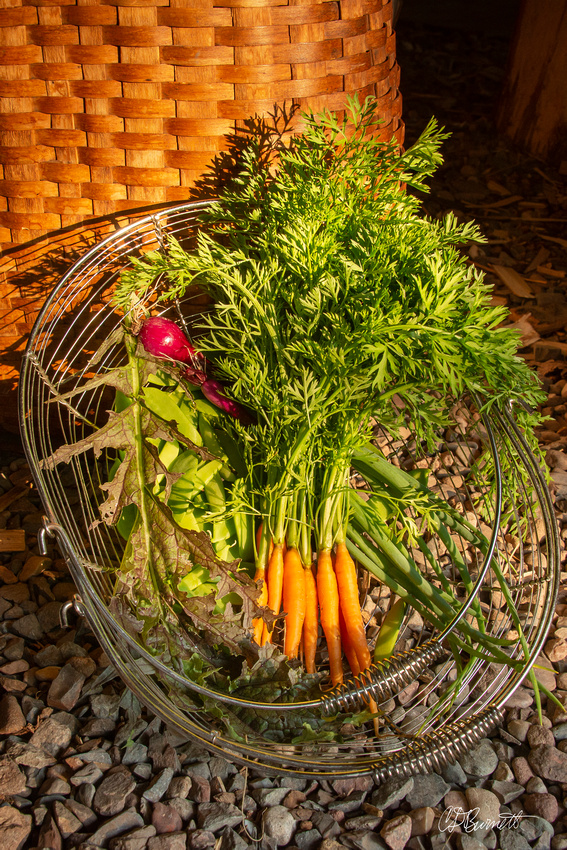 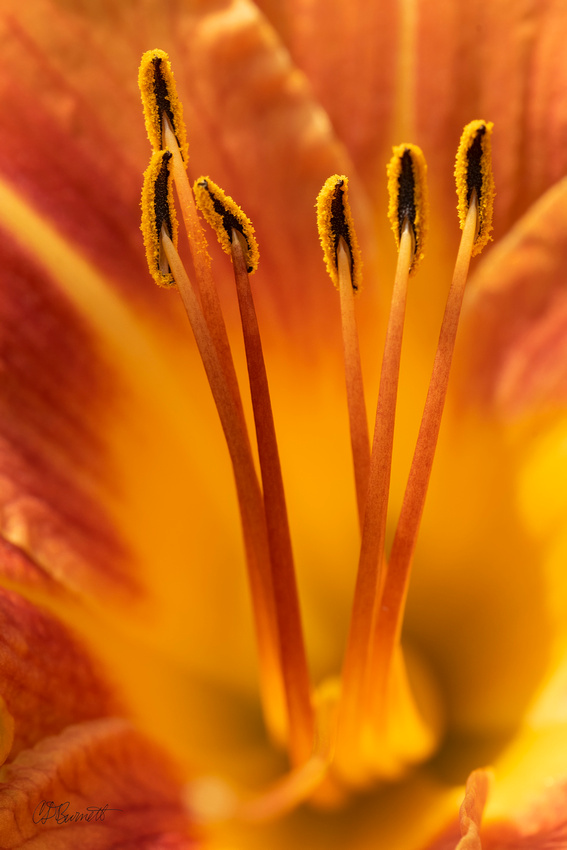 Day Lily StamensThe orange or tawny daylily (Hemerocallis fulva), common along roadsides in much of North America, is native to Asia. Along with the lemon lily (Hemerocallis flava), it is the foundational species for most modern cultivars.

The main animal ingredients of our mid-summer this year have been horses and butterflies.  In our ongoing quest for a second suitable trail riding horse, we sold our moody, cart-trained, Haflinger mare, Meadow, and bought Roy, an older gentleman gelding with a great resume. He’s 7/8 Polish Arabian with very tall withers, so fitting a saddle to him & me is now the challenge. Roy had been poorly cared for over the last year, but he’s gaining weight and has had his hooves trimmed by our new farrier, a 19-year-old who’s been a farrier since she was eleven! 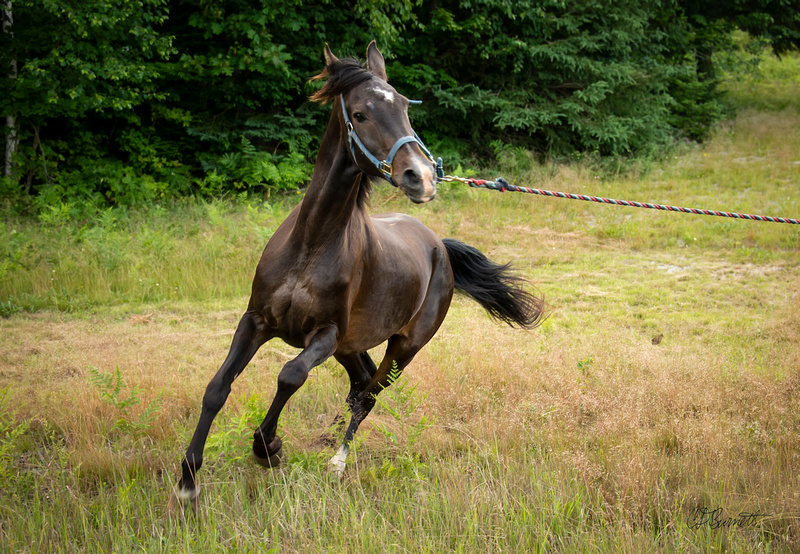 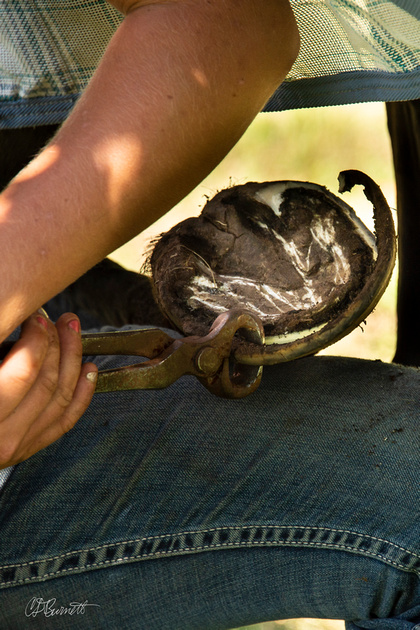 Trimming Roy's HoovesNineteen year old farrier has been trimming hooves since she was eleven.

Finally, a close-up shot of a great spangled fritillary (Speyeria cybele), which seems to be the most common butterfly here this season, followed by monarchs.