Short-Grass Squirrel with a Long Name

I try to do a mix of mental and physical work each day because both need doing, and I get tired of doing too much of either one. Until just recently, I was doing office/studio work in the morning so it would warm up outside before body work in the afternoon. Now I’m trying to beat the heat by working outside first.  One of our resident mammals, the thirteen-lined ground squirrel, responds to seasonal climate changes much more drastically.  They hibernate for two-thirds of the year, being active above ground only from May through August and then mostly when it’s sunny and warm

Thirteen-liners require short-grass habitats. Originally confined to the prairie, they have extended their range northward and eastward over the past two centuries as land has been cleared. They’re most noticeable, and photographable, in May when the grass is still short and I’m about the homestead with orchard pruning, firewood processing, and garden preparations.  They’re fun to watch and fairly tolerant of humans, unless they eat too many strawberries or kohlrabis, and I have to live-trap and relocate a few.  Who they need to worry about are the red-tailed hawks and badgers. They are an important prey base for small predators, such as weasels, raptors, and snakes, and help to recycle soil nutrients through their burrowing activities.

Thirteen-liners have excellent senses of vision, hearing, and smell. They use alarm calls and other sounds, as well as using special scented secretions, to communicate with other squirrels. They rub glands around their mouth on objects to leave scent marks. They also greet one another by touching noses and lips.

The long scientific name for thirteen-liners is one of my favorite Latin binomials, Spermophilus tridecemlineatus, meaning seed-lover with thirteen lines.  They do love seeds but are actually omnivorous like many other small rodents (and humans). 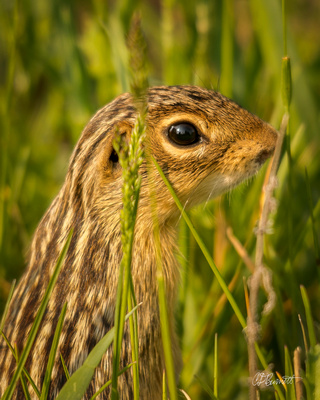 Standing TallThirteen-line ground squirrels have a habit of holding there long skinny bodies straight up as they survey the landscape by sight, sound & smell. 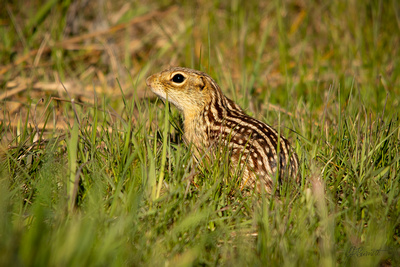 Thirteen-liner CallingThey use alarm calls and other sounds, as well as using special scented secretions, to communicate with other squirrels. They rub glands around their mouth on objects to leave scent marks. 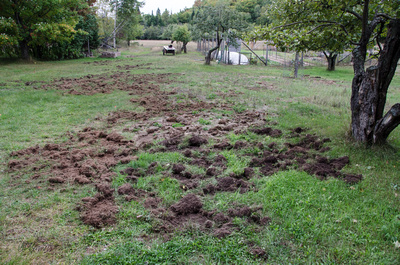 Badger RototillingImagine my surprise when I awoke one morning to discover a badger had "rototilled" my lawn digging for grubs and ground squirrels. 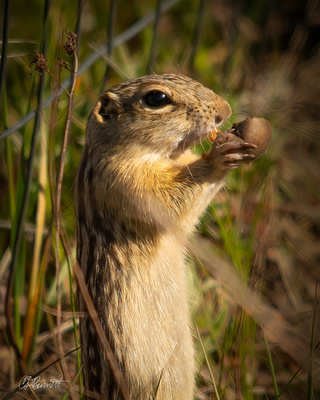 Thirteen-liner with AcornI watched this thirteen-liner consume a whole red oak acorn as it stood tall & kept an eye on me. 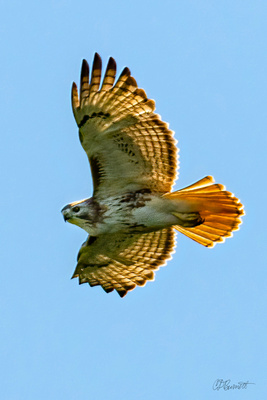 Red-tail LaunchingI saw this red-tailed hawk land in a tree at the edge of the woods - probably hunting ground squirrels. I went & got my camera & walked closer than I thought it would let me before it launched. 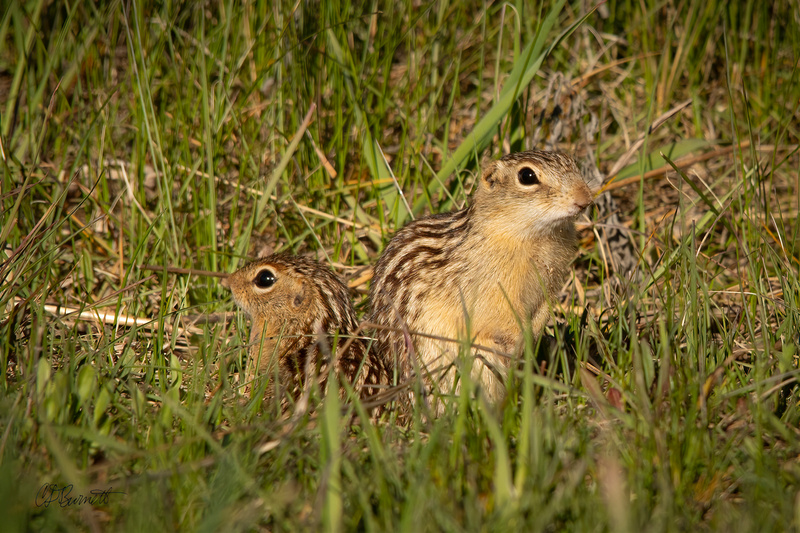 Thirteen-liner Sow & KitFemale squirrels are called sows and the young are called kits.