Our first run of maple syrup for 2021 has left the evaporator and is being finished off today with a big propane burner (borrowed from the beer making equipment). As predicted, migrating birds are returning, lead by dark-eyed juncos, and bald eagles are cruising over Big Creek checking for spawning steelhead. The snow has largely gone, much earlier than usual this year, making pruning the orchard easier. The early sap flow was interrupted by freezing weather all day and is now being interrupted again by above freezing temperatures all night.

Checking a few websites, I have found that sugar makers have differing opinions about what to do about the ice that forms in sap buckets. Some say throw the ice out because it's just frozen water and the remaining liquid has a greater concentration of sugar and will require less fuel to boil down to syrup. Others say that too much sugar gets lost by dumping the ice and they collect it to get every last drop of syrup possible. Either way, the discs of ice that form can get pretty interesting with hollows, and channels, and crystals. If you look closely at the sap being poured from buckets with ice, you can often see threadlike networks caused by differential refraction of light in sap with varying concentrations of sugar.

Another controversial topic amongst maple sugar makers is what to do about the foam that forms during boiling. The foam consists of organic compounds and results from a chemical reaction that occurs as the sap heats. Boiling also causes minerals in the sap to precipitate as solids. This precipitate is commonly called niter or sugar sand. It is harmless but gritty and not pleasant to eat. Skimming the foam reduces the amount of niter in the end product as the minerals stick to the organic compounds that make up the foam. Some argue that foam slows evaporation while others theorize via a lot of physics that foam actually increases evaporation.  On a small scale skimming the foam is easy.  On a large scale it can be a big deal and many kinds of defoaming agents are used. In any case, sugar sand can be mostly removed by filtering the syrup as it is bottled. 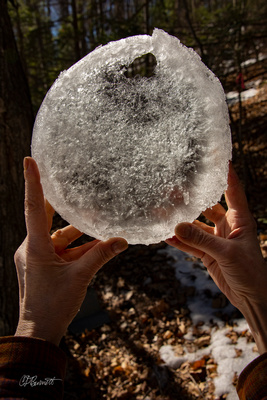 Maple Sap Bucket IceIce in sap buckets is just frozen water, but some sugar can get trapped in it. 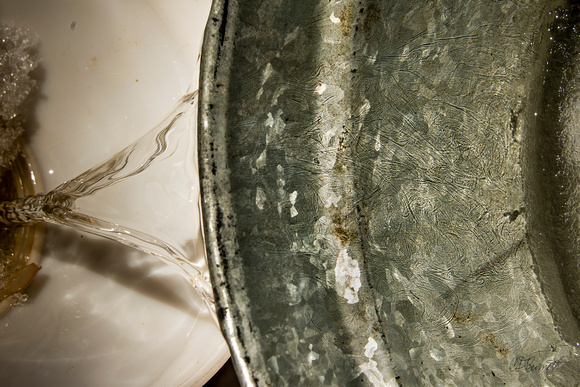 Maple Sap Foam & SkimmerDuring boiling, foam develops after fresh sap is added. The foam is the product of a chemical reaction that occurs as the sap heats. The cooking also causes minerals in the sap to precipitate as solids. This precipitate is commonly called niter or maple sand. It is harmless but gritty and not pleasant to eat. The minerals stick to organic compounds that make up foam. Skimming foam reduces niter in the end product. I use an extra sap bucket to rinse the foam from the skimmer. 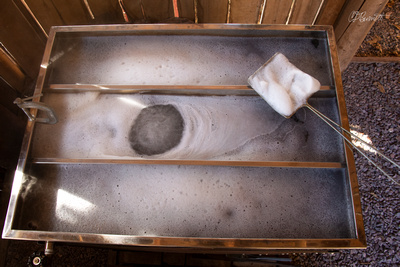 Skimming the FoamMaple syrup makers have diverse ideas about what to do about foam. I skim it off.