Because late summer for me was dominated by construction of a multi-purpose outbuilding (see previous blog), my photography during this season was mostly limited to nearby phenomena around the homestead caught my eye. Principal among these were the many bumblebees collecting pollen in the gardens and meadow. The bumblebees I photographed appear to be of two common species, the Common Eastern Bumblebee (Bombus impatiens) and the Tri-colored Bumbebee (Bombus ternarius). Unfortunately, populations of many bees around the world are declining, and the effects are reflected in the economy. According to a 2016 report by the U.S. Department of Agriculture, the U.S. has a $15 billion industry that relies on bee pollination.  Fruits and vegetables such as pumpkin, apples, blueberries and oranges all require pollination from bees to help them grow. The fate of the American bumblebee (Bombus pennsylvanicus) hangs in the balance, having declined by nearly 90% across the U.S. and disappeared entirely from eight states. These bees are suffering from pesticide use, habitat loss and the effects of climate change. Evidence is being reviewed as to whether the American bumblebee should be officially listed as endangered. In the meantime, conserving native plant habitats and limiting pesticide use can help all bees. For a handy guide to bumblebee identification, see this.

A side benefit of photographing bees gathering pollen close up is discovering the interesting and weird structures on the plants they are visiting. Luckily, getting up close and personal with pollinating bees is quite safe as they are busy with their task and don't seem to mind the attention. One of the strangest native plants in our dry meadows and roadsides is Spotted Beebalm (Monarda punctata), a.k.a. Horsemint with its whitish, purple-tinged, leaf-like bracts and dragon-mouth flowers. Like it's close relative, the more widely known Bee Balm or Wild Bergamot (Monarda fistulosa), Spotted Beebalm is an important food plant for bees. Both species also contain a wide variety of aromatic compounds with culinary and medicinal uses. Because it is often called bergamot, I used to think that Monarda fistuloa is what's used to flavor Earl Grey tea, which is flavored with bergamot essential oil. However, when my kids recently brought Earl Grey ice cream for the holidays (it's really good!), I learned that the bergamot oil used for the tea properly comes from the rind of bergamot oranges, not Bee Balm.

The next photo shows the developing grains of Proso Millet, also called common, or broomcorn millet (Panicum miliaceum) commonly used in birdseed mixtures (from which this plant grew beneath our bird feeder). It is also used as a livestock feed and eaten as a cereal food in Asia, eastern Europe, and our kitchen.

The one photography project I intentionally pursued a bit this season was "forest interiors". When it's sunny, the extremely high contrast lighting that  occurs in forest interiors makes getting a good exposure a real challenge. When it's overcast, the uniform lighting often results in photos that lack vitality (oumph or pizzaz).  For the two forest interior photos shown here, I think I caught the lighting conditions just about right, somewhere between too contrasty and too uniform. 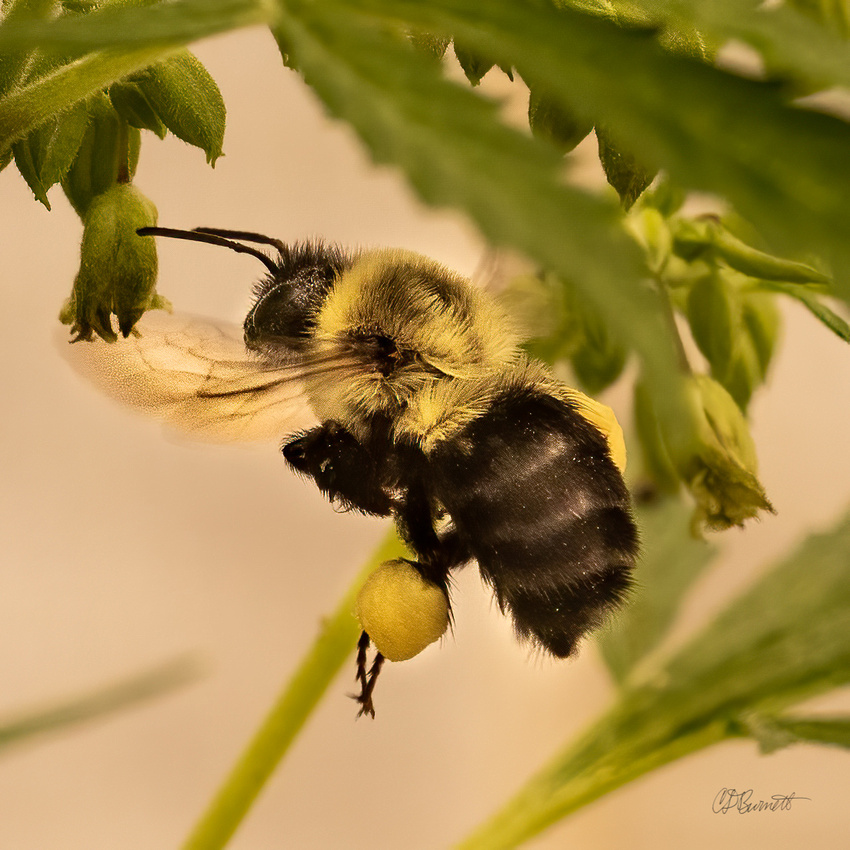 Bumblebee with Cannabis PollenThe cannabis plant is mostly wind pollinated and therefore has not evolved to attract bees. It does not produce a smell that would attract bees, nor is it colorful and finally, and most importantly, it is unable to provide a reward in the form of floral nectar. However, our male Cannabis plants are highly attractive to bumblebees who collect the pollen for food. 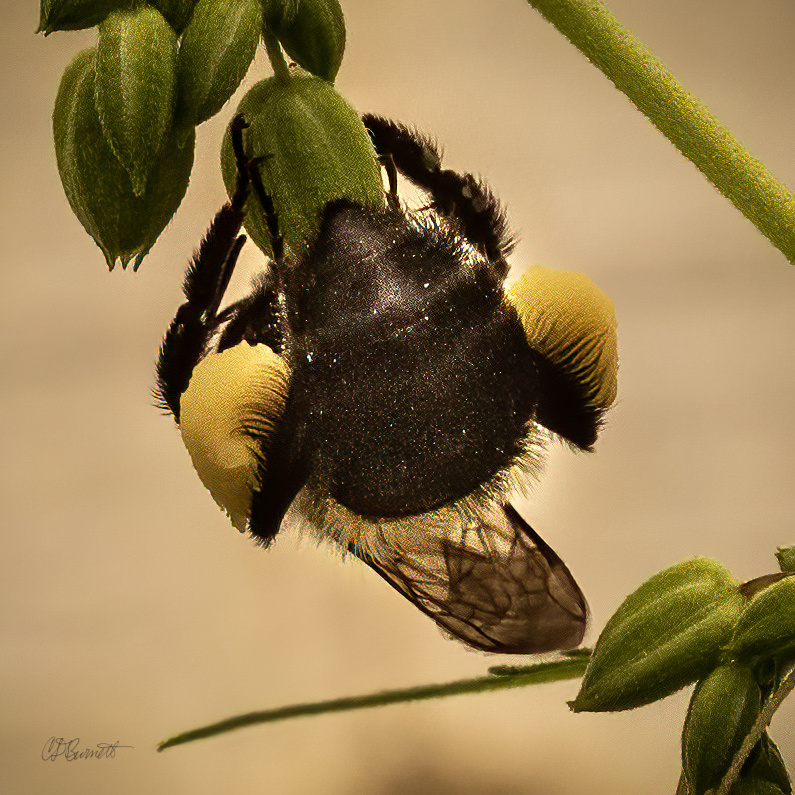 Bumblebee Pollen SacsThe cannabis plant is mostly wind pollinated and therefore has not evolved to attract bees. It does not produce a smell that would attract bees, nor is it colorful and finally, and most importantly, it is unable to provide a reward in the form of floral nectar. However, our male Cannabis plants are highly attractive to bumblebees who collect the pollen for food. 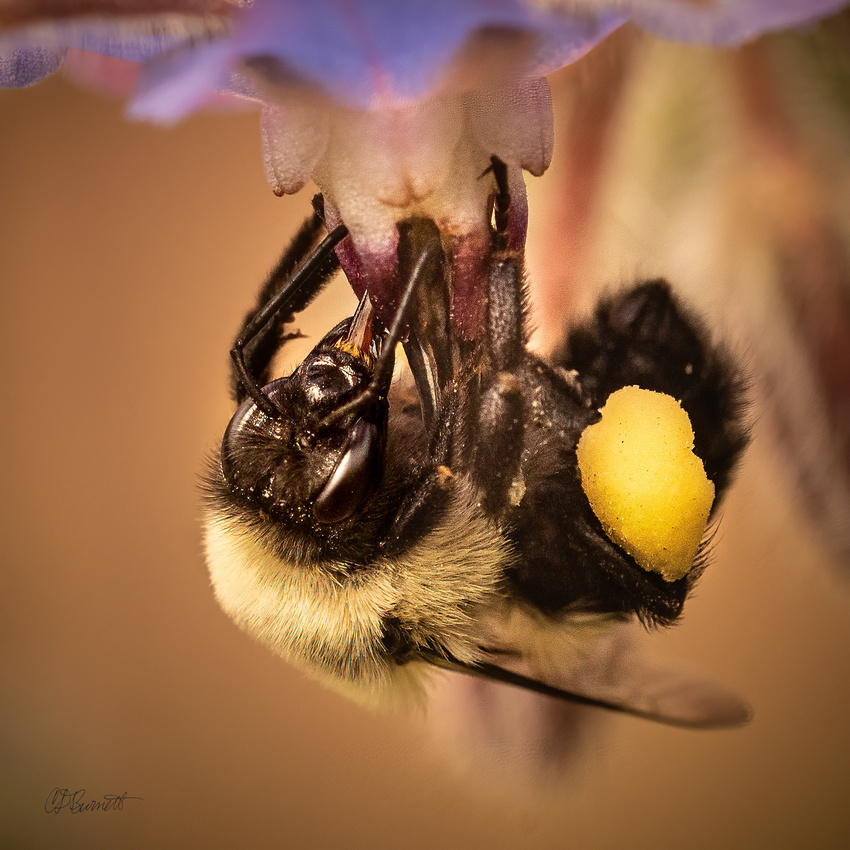 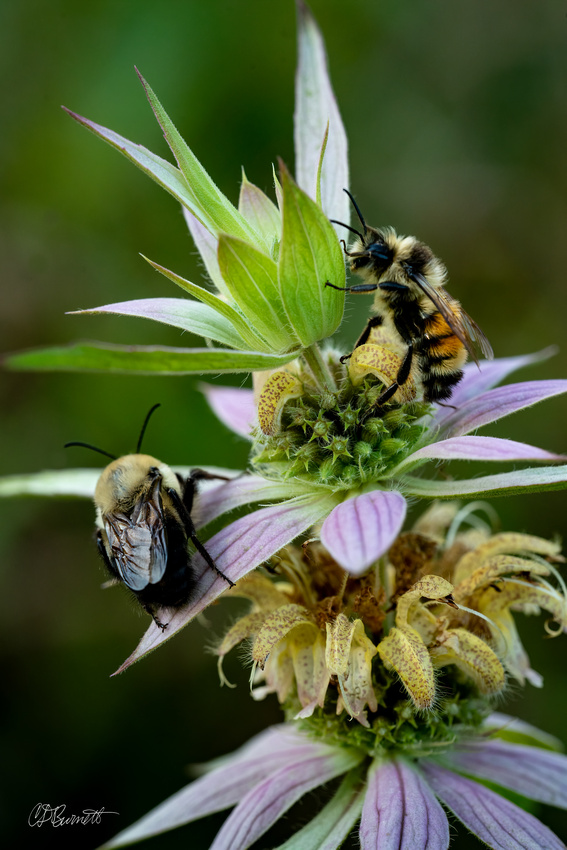 Bumblebees on Spotted BeebalmTwo species of bumblebees. The one with orange is probably the tri-colored bumblee (Bombus ternarius). 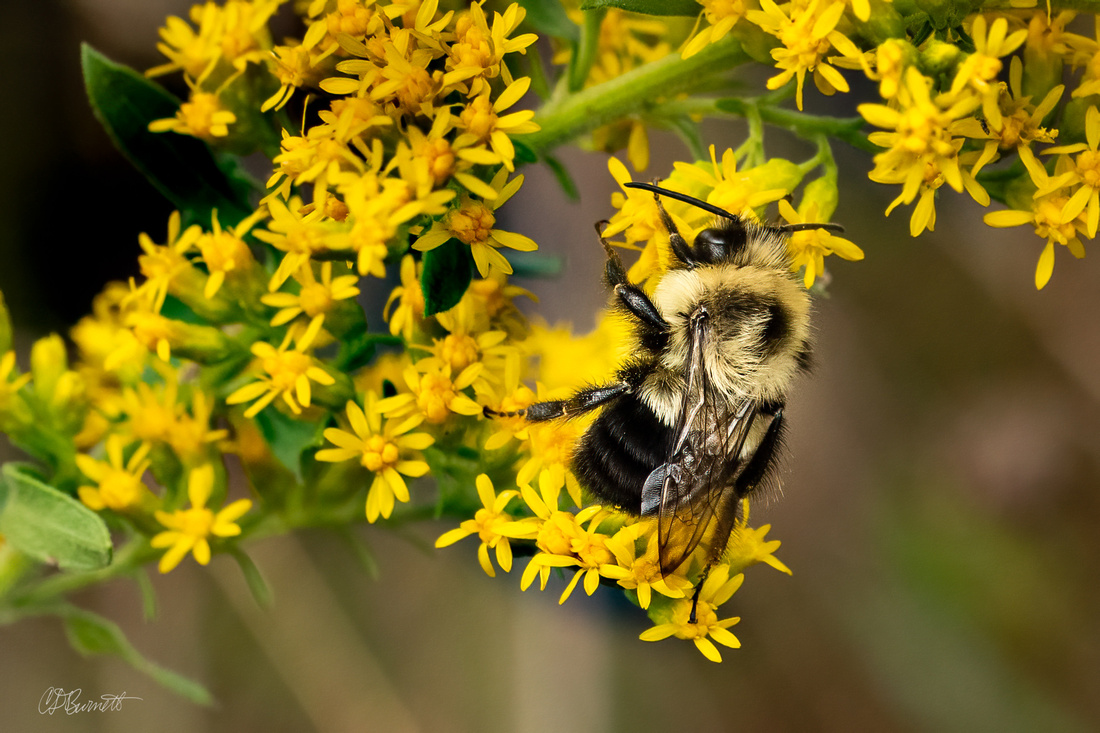 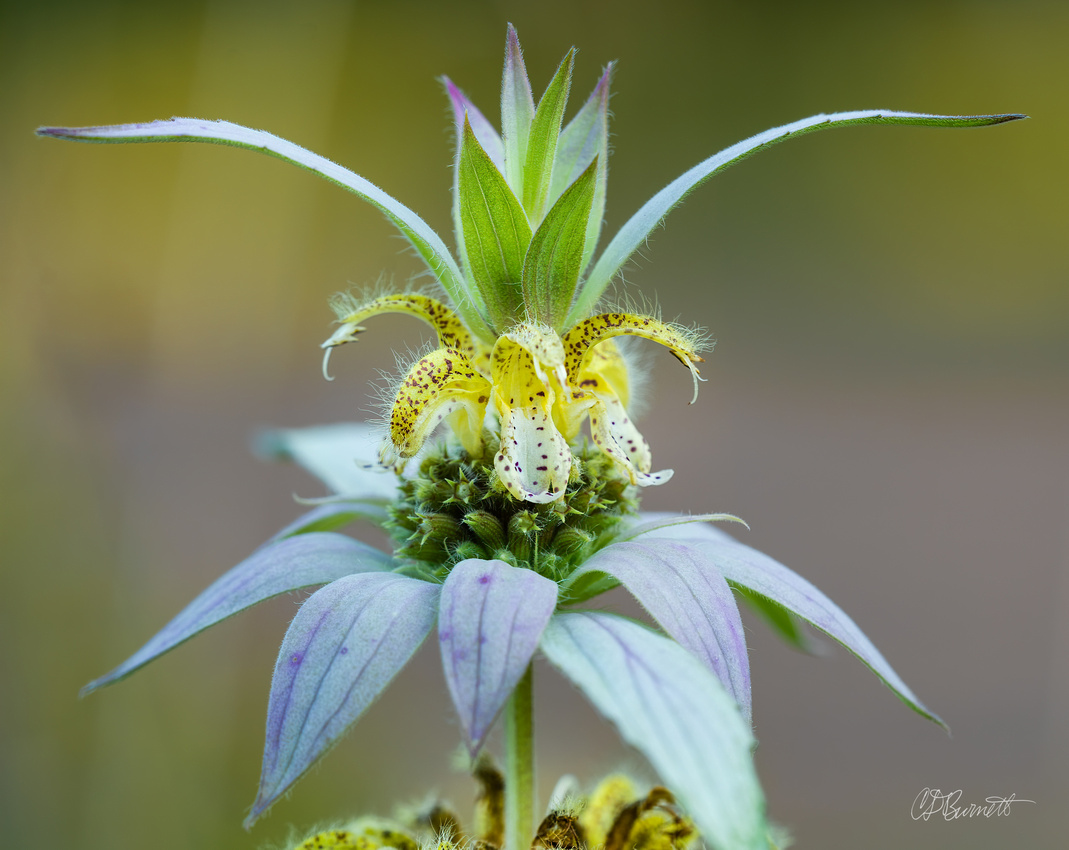 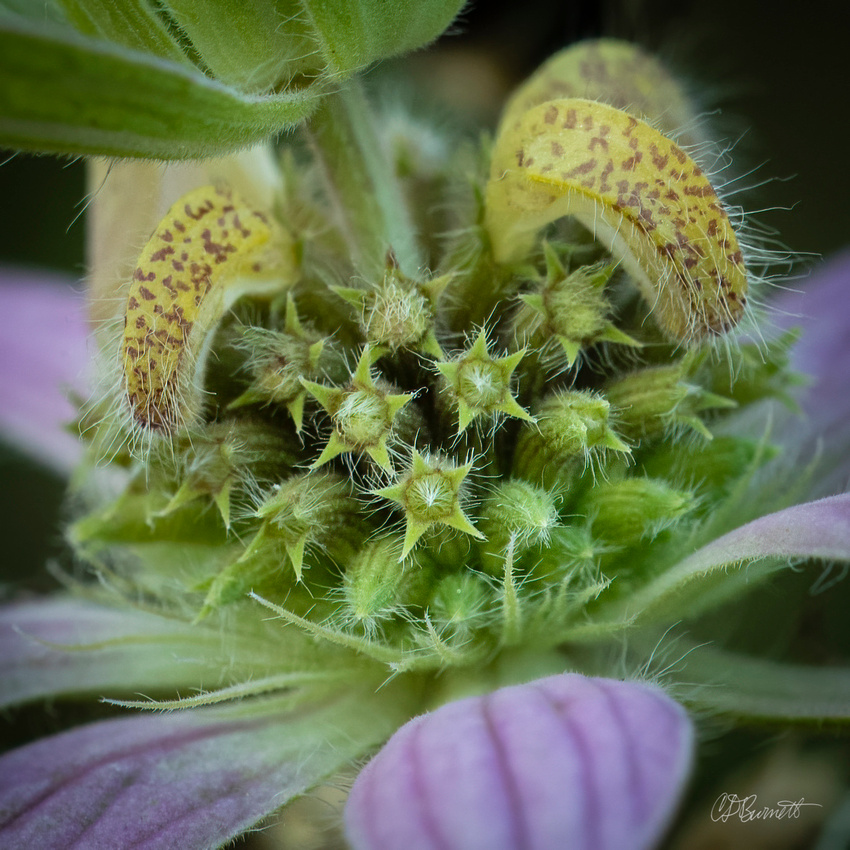 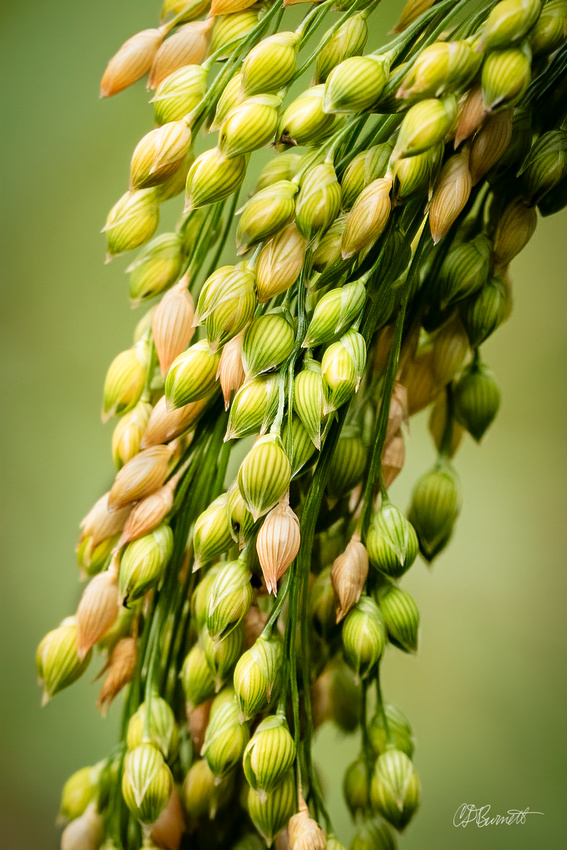 Birdseed Millet RipeningProso millet—also called common, or broomcorn, millet (Panicum miliaceum)—ripens within 60–80 days after sowing and is commonly used in birdseed mixtures. It is also eaten as a cereal food in Asia and eastern Europe and is used as a livestock feed elsewhere. 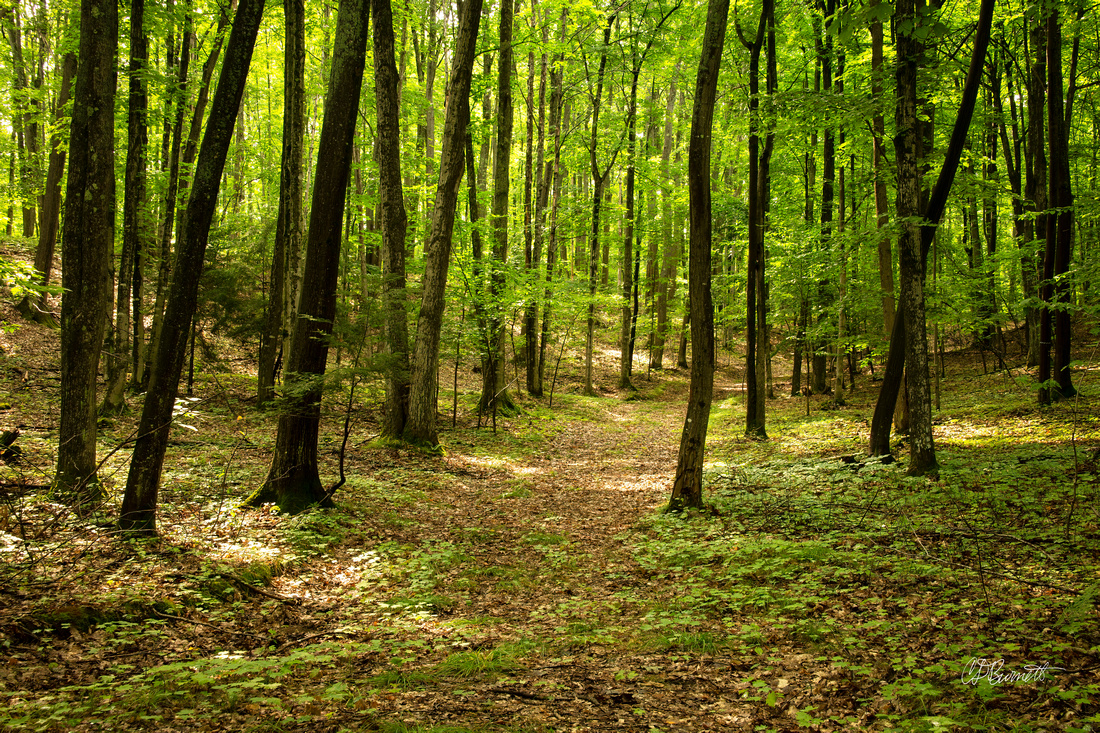 May the Forest Cool You No. 2Northern red oak dominates this forest stand